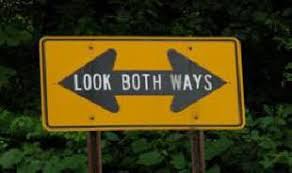 I imagine most of us were told this piece of wisdom when we were children: “Before crossing the street, look both ways.” My mother’s words came screeching back to me when I attempted to cross a busy street in Sydney where the cars are driven on the opposite side of the street. As I continue my research into evolution and the cosmos and its intersection with theology, I hearken back to these words of wisdom: look both ways. I wanted to know what science adds to our conversation about God, origins, sin, and redemption, but I quickly came to realize I had unknowingly committed the cardinal sin of researchers. I began evaluating one discipline with the tools and vocabulary of the other. A first step is distinguishing between the two.

As Elizabeth Johnson explains, “Science investigates the natural world to discover, control, and predict how things work. Religion articulates ultimate meanings and a path of moral behavior befitting those meanings.” (Ask the Beasts: Darwin and the God of Love [London: Bloomsbury, 2014], 8).

Scientists propose a theory to explain observable facts and known principles and then continually tests those theories as new data becomes available. In juxtaposition, “theology proceeds from its own sources of knowledge, starting with the testimony of scripture and playing through the whole tradition’s witness to the self-revelation of God, while hoping to be enlightened by other sources of knowledge” (Ask the Beasts, 10). Stories of the burning bush and the empty tomb aside, the sources of Christian knowledge are not always observable and certainly not measurable. As the Letter to the Hebrews acknowledges, “faith is the assurance of things hoped for, the conviction of things not seen” (Heb 11:1).

But despite the different goals and sources of knowledge, science and theology are not only important academic interloculars, they both recognize the fragility of our world, the devastating effects of greenhouse gases, and the urgency for action.  An article in the January 2020 issue of BioScience explains the concern:

Scientists have a moral obligation to clearly warn humanity of any catastrophic threat and to “tell it like it is.”

On the basis of this obligation and the graphical indicators presented below, we declare, with more than 11,000

scientist signatories from around the world, clearly and unequivocally that planet Earth is facing a climate

Similarly, Pope Francis urges that “science and religion, with their distinctive approaches to understanding reality, can enter into an intense dialogue fruitful for both… If we are truly concerned to develop an ecology capable of remedying the damage we have done, no branch of the sciences and no form of wisdom can be left out, and that includes religion and the language particular to it” (Laudato Si’, paragraph 62-63). Pope Francis echoes what Pope John Paul II had said earlier.

Turning to the relationship between religion and science, there has been a definite, though still fragile and

provisional, movement towards a new and more nuanced interchange…We have begun to search together for

a more thorough understanding of one another’s disciplines, with their competencies and their limitations, and

especially for areas of common ground. In doing so we have uncovered important questions which concern

both of us, and which are vital to the larger human community we both serve (“Letter To the Reverend George

As this project proceeds, it becomes increasingly clear to me that we need to look both ways: toward science and its theories and back to theology and its critical reflection and search for deeper meaning. To that end, the expression, “New Cosmology,” is no longer an adequate term. As one keen survey respondent noted, “evolution and the Big Bang aren’t new to me.” Since for more than three decades, theologians and spiritual writers have reflected on the “New Cosmology,” it is time to lose the “New.”

But similarly, “cosmology” is a scientific term referring to the study of origins and development of the universe. To capture the integration of the findings of science with the work of theology, I think a better phrase is “cosmotheology” (not to be confused with Immanuel Kant’s “cosmotheology,” a type of transcendental theology [The Critique of Pure Reason; trans. J M. D. Meiklejohn; Middletown, DE : Pantianos Classics, 2018]). The intent of this project is not to critique the findings of science. Rather, my hope is to ponder the theological implications of some scientific theories that pertain to the universe and evolution and to propose how wisdom distilled from a cosmotheology might provide a strategy for the reading of Scripture. Basically, I’m simply listening to my mother and looking both ways.

Thank you for being part of the process of discovery. While our blog posts will end here, we will continue our research with a goal of producing a worthy synthesis that holds in tension science, theology, emerging ethics, and our faith. It’s now time to write the book!

A note to commentators: I am a Catholic Christian scholar for whom the Gospel directs not only my teaching, but my actions and hopefully my speech. I look forward to your insights, but I ask that in the spirit of Christian charity and courteous discourse you write with love and civility. Uncharitable or discourteous speech has no place in thoughtful dialogue.

Thank you, Laurie, for delving into these issues and opening up these questions. As part of a cosmotheology, perhaps the thought of Michael Dowd (Thank God for Evolution) might be considered. He sees scientific fact as a kind of “day language”–grounded in objective experience– while religious beliefs stemming from scriptures are a kind of “night language”–-communicated by way of metaphors, poetry and images. “We need both day and night language in order to have a meaningful experience of life. The important thing is to get the order right.”
This distinction has been very helpful to me.

Carol, that’s a great idea. I like Dowd’s interpretation. I’ll look for the book!

Thank you, Laurie, for a wondrous ,refreshing look at the Cosmos Story that thrilled me years ago; now you have quickened my yearning to
examine anew…..blessings on your research…you have an awesome gift.

Judy, It takes a village…many folks like you have contributed to our study. We are grateful for you!

0
Reply
Topics: Blog: In the Beginning...
Departments:
Tags: climate crisis, Faith, Laudato Si, New Cosmology, science
We use Cookies on this site to enhance your experience and improve our marketing efforts. By continuing to browse you agree to the storing of Cookies and related technologies on your device.
Read More. Accept
Privacy Policy